Can the CMO become the CEO? 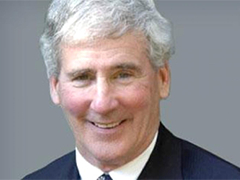 I don’t think any lengthy conversation about the evolving role of the chief marketing officer is truly complete without this question being asked. And then, someone will ask, “Do you have an example of when a CMO became a successful CEO?”

Former Vice President of Marketing at Apple-turned-former CEO at Intuit, Campbell was a good friend of our Executive Director, Donovan Neale-May, and an original keynote speaker at one of the very first CMO Council CMO Summit events, so perhaps I had an unfair vantage point, but the answer remains the same. Bill Campbell was a CMO before CMOs existed, and he became a CEO before customer-centric CEOs existed.

Sadly, Silicon Valley, if not business, lost a true mentor and coach this past April as Campbell, 75, passed away.

If you are not headquartered in the Valley or focused on the region, then chances are this news swept right past you. Campbell was not a celebrity CEO or a household name by any stretch, but you would likely recognize the companies and CEOs he mentored, guided and led: Intuit, Google, Apple, Twitter and Amazon to name just a few.

In the handful of articles that have been written in memory of Campbell, what bubbles to the surface with incredible velocity is the man’s seemingly endless capacity for mentorship. He didn’t just pass along some advice…he created lasting bonds with up-and-coming industry leaders with names like Jobs and Bezos. But more than that, he was one of marketing’s first thought leaders—not a self-proclaimed one, but a real one whose mentorship and wisdom has stood the test of time.

Several statements and obituaries have been published, but there is always a line that seems to go unnoticed. For us in the marketing world, it should be the headline: Campbell started his career with the agency J. Walter Thompson and moved his way through roles at Kodak, eventually making his way to Northern California to serve as the Vice President of Marketing at Apple.

Bill Campbell was a marketer. Yes, he was a mentor, a business leader and sales leader—but he was a marketer. Even more impressive is that he was a marketer who didn’t care to be a brander or just called in to talk about advertising budgets. He was going to drive the business and the bottom line forward. In an interview for USA Today, Campbell shared how he came to join Apple when John Sculley, who had originally interviewed him for a marketing role at Pepsi, reached out.

“So [Sculley] calls me up and says, "I want somebody that's had some good marketing experience, somebody that's mature enough to manage a lot of these wild young kids. Because the whole company is a bunch of wild-ass young people." So I said, "F*** yes, I'll take this job. I wanted it. It was important to me that I sit around the table. I wanted to be one of the officers.”

That was in 1983, long before the age of the CMO. Campbell knew exactly where he wanted to be in order to be the marketer Apple needed him to be. Campbell left Apple, eventually moving on to serve as the CEO of Intuit, only retiring from its board of directors in January 2016. He is the ultimate tale of the marketer who went on to become a successful and influential CEO.

Campbell always held a soft spot for his marketing roots. At the CMO Council’s 2003 CMO Summit, Campbell addressed a room full of marketers and shared this in his keynote titled “Team Conditioning: Winning Game Plans for Marketing Leaders.” In the presentation, he told the audience, “Virtually every great innovation that's occurred—at least the ones that I know—have been created by great engineering talent and visionary people. But there isn't a product anywhere that hasn't been made better and applied more appropriately by having great marketing input."

Campbell transcended title or function, aiming straight for the heart of the business. For people like Donovan who called Campbell a friend, the loss will be keenly felt while reminiscing over a rugby match, preferably with a big group of old friends and more than a couple cold beers. For marketers, Campbell’s life and career should be celebrated and thanked. Bill Campbell paved the way and outlined what it would take to elevate and advance as a marketer and business leader. Now, it’s up to us to keep the ball moving forward, even if we have to do it without “the Coach” guiding us along the way.

I’ll leave you with the closing remarks of Campbell’s keynote to the CMO Council back in December of 2003:

“We've lost the focus over the years. You people right now, this Chief Marketing Officer Council, you have an opportunity to redefine what marketing should be about. You have a very broad, diverse, very talented group. I'd like to see it go back to that model where everybody believes that marketing is the center of what every company has to do.“

Okay, marketers—let’s get to it.